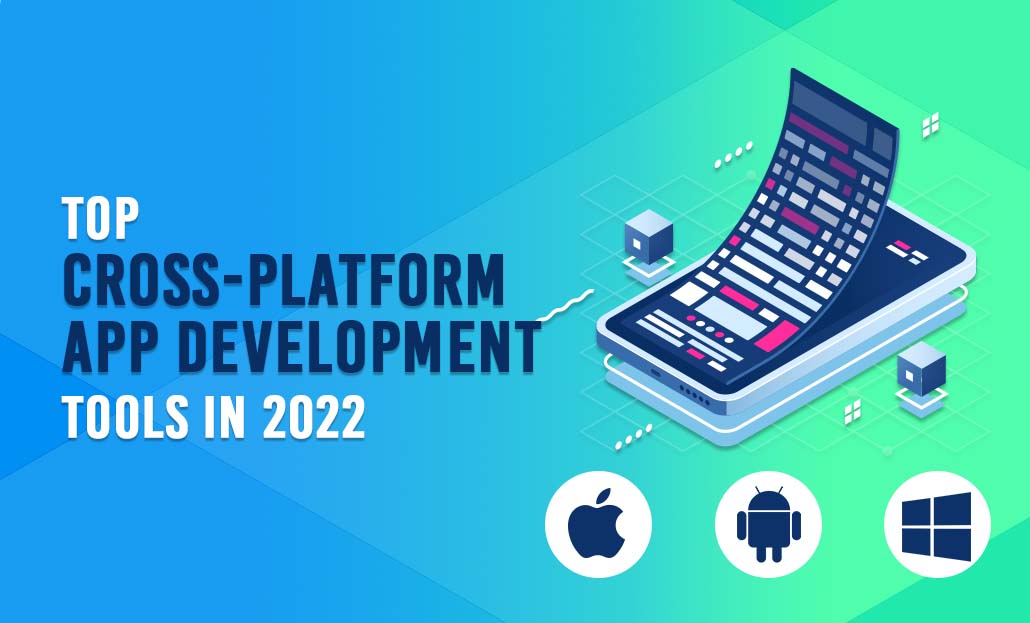 In today’s ever-changing world, businesses want their presence on Google Play Store and Apple Store. They are counting on huge customer base of smart phone users. Budgeting is a serious concern for businesses. They have to invest in the best technology at the right time and plan for future. They want latest technology without putting a whole in their pockets. This is why native apps that work on a single platform prove to be expensive. Imagine an app working only on web and not on your mobile phone.

How do companies navigate this problem of creating good innovative apps that work on many devices? It is the new cross-platform app technology that helps companies to maintain a presence on many platforms.

We help you understand tools needed to develop Cross Platform Apps in 2022. Here is a list of top 5 tools before we explain them in detail.

React Native helps build apps on many platforms like iOS, Android, and web. It uses same code base and it is an open-source technology. It has been a boon for mobile app development. React Native adds simplicity, the developers make complex tasks simple with uncomplicated codes.

Developers love React for reusing and recycling components developed before. They know that they have a wide React Native ecosystem. Codebase can be shared, which helps them to work faster.

Although custom modules are available, specific components have to be built from scratch.

Flutter is an open-source development kit for building iOS and Android-friendly apps. You can build high-quality apps quickly, without having to write the code for the two apps separately. You just need one codebase for both platforms and flutter has exactly that. Here are two case studies you can check out about how developers are helping companies to build apps as per their needs. A company in healthcare industry from US approached our team to design app using flutter for both iOS and android. Another company approached our team to build mobile app using flutter for ecommerce industry.

Toyota is using Flutter by building next-gen infotainment systems for their vehicles.

Fixing bugs and making instant changes are easy in Flutter as compared to other tools.

If you want to use Flutter you will have to learn how to use Dart.

Xamarin undertook a study to find that their cross-platform tool is used by over 1.4 million developers globally. Their products are used by nearly 15,000 companies. Xamerin is a perfect tool, it is a developer’s dream. It creates code once for various platforms. It has good app performance, maintainability, and user experience. It is programming efficient and cost-effective and it has all features of native apps.

Pinterest has a very large user base and that led it to launch its mobile app. They used Xamarin and its Test Cloud to code in the language of their preference and reach a larger market. It ensured that their pins were being displayed properly on all devices.

Xamerin has high compatibility with MVC and MVVM architectures

UI development takes a lot of time and it is not mobile-friendly.


Ionic is excellent for UX/UI design components. It enjoys a good reputation among developers for smooth animations, designs, and themes. Ionic framework is frontend based with HTML, CSS, JavaScript, and beautiful designs. It can create an interactive and user-friendly application. It supports popular web frameworks like Angular, React, and Vue.

It is very unlikely that you haven't heard of McDonald’s. The fast-food giant in Turkey has worked hard to build a solid digital presence. They use Ionic to provide you with lots of deals and discounts on their app in Turkey.

The best part about using Ionic is that it has a single codebase. One code runs on all the platforms.

Debugging can be challenging and requires more time because of unclear error messages.


Sencha is a mobile application framework. It helps to build fast and efficient apps that work on iOS, Android, BlackBerry, Kindle Fire, and more. It can be used to develop quick prototypes and launch apps on all platforms at once.

It's has a vast array of pre-built components, charts, and a data-grid-based solution.

It takes a fair amount of time to get the application up and running if you are starting from scratch.

Traditionally, separate apps were made for different operating systems and various devices. It has been simplified by cross-platform development tools. With a universal programming language, apps become more efficient, fast, and innovative. We can help you to build cross-platform apps with our experienced developers. You can contact us anytime and we will answer all your queries and provide quality services.