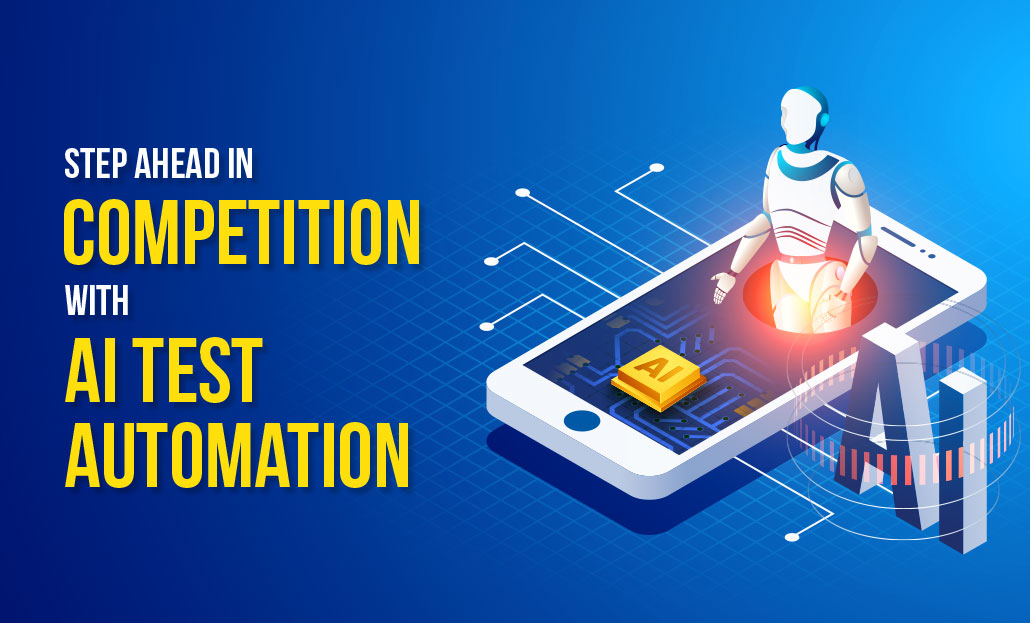 Step Ahead In Competition With AI Test Automation

With the pace at which technology progresses, speed and accuracy are the two critical factors that business needs to stay relevant. To keep up with the fierce competition, every company should function exceptionally well. Software testing aids them to figure out defects in the product and take appropriate actions, so that they can enhance the overall accuracy and performance.

Effective testing is very essential for the success of any software product. Machine-controlled Testing or Testing intrinsically must evolve to deal with today's complicated needs. To achieve this, there is a necessity to add automated testing in addition to the existing manual testing process. Moreover, most of the teams have realized that it is high time to hire automation testing services to make the Software Development Life Cycle (SDLC) process more efficient..

There are many tools available in the market for automation testing, but one approach, which receives more attention, is the use of Artificial Intelligence (AI) in test automation. As the power of AI is growing gradually we should take advantage of it to implement the same in our testing practice to make the time-consuming task simpler.

Benefits of Artificial Intelligence in Moreover, most

UI is the first thing that gets the user’s attention when they navigate the website. Proper emphasis should be given to the look & feel of the User Interface. Image-based testing verifies whether all the UI elements are displayed correctly with proper color, shape, position and size.

Image-based testing is becoming simpler with the emergence of automated visual validation tools. These tools help to detect the defects, which are generally missed in manual testing.

By using AI in UI testing, the machine learning test will automatically find all the UI bugs in your software. There is no need for manual intervention to implicitly validate whether the UI elements are properly displayed on-screen or not. It makes UI testing faster & more stable.

A most common problem in the test automation is the maintenance of the test suite/script.

Let’s say we must execute 500 tests daily to ensure the functionality of the application is working as per the requirements and find that half of the tests have failed. In such a case, we have to spend a lot of time to troubleshoot the problem of failures and investigate what actually went wrong. This involves figuring out ways to fix the failures in the script. After which we must re-run the test cases, which is a time-consuming process.

AI can prevent such issues with its self-healing mechanism. It starts detecting problems in the tests before they occur and thus fixing them before we recognize the possibility of failure.

AI helps us remove the flaky tests - the tests that fail randomly during each execution. As a result, AI can ensure the test is running stable.

Even the experienced tester may fail to maintain accuracy when dealing with a repetitive task. Automated testing with Artificial Intelligence can perform most of the tasks exactly in the same way as humans but in a more accurate way. As AI perfectly automates the repetitive tasks, it can save time and effort of the tester to a certain extent. Testers can concentrate more on creating other test cases or tasks, which demands human interventions.

Implementation of AI in testing helps to increase the scope of testing significantly. It can check the contents in files, data tables, program states and many more and ensure the program is working as expected. AI enables tools that can allow running thousands of test cases in one go which is almost impossible in manual testing.

In traditional manual testing, bugs may remain unrecognized for long periods. If these bugs are ignored at the initial stage, then it may become expensive in later stages to fix it. AI can find the hidden defects in seconds, which can save the time of the manual tester. AI automatically assigns the bugs, which can’t be auto-corrected to QA team members.

AI can even recognize patterns & images of applications and verify whether the visual elements are reflected correctly and working as expected. AI in automation testing can also recognize UI control, which is dynamic. AI tools can take the screenshots and measure the load time of the page that has visual elements.

It provides Application Visual Management (AVM) that helps the user to visually test the web and native mobile apps in an automated way.

Using AVM, you can verify that your application appears similar across all browsers, devices and in screen sizes.

TestCraft is a test automation tool for regression and continuous testing. It uses AI technology. This Selenium test automation platform for web apps supports drag and drop. There is no need to write any code. It allows faster test creation and execution while minimizing test maintenance time & cost using AI technology and visual modeling.

It also provides Software as a service(SaaS) distribution model.

Artificial intelligence in test automation can reduce testers’ effort and cycle time. It also enhances the user experience of the product in the least possible time. It learns from the data provided by the human testers and automates most of the testing activities. The business should recognize the ideal role of the AI-based automation techniques, which will shape the future of your testing process.

When to opt for manual testing & automation testing?