Python vs. PHP: The Battle Is ON

Both Python and PHP are prominent and powerful languages and amongthe two, Python is used for general purposes similar to Java and PHP which are mostly used for web development. They are quite different from one another in terms of defining variables, syntax, speed, areas of application, code readability, etc. Python came to the market earlier than PHP whereas PHP is a more popular language.

There is an interesting cold war occurring between PHP fans and Python lovers and it’s not showing any signs of dying down. It will be interesting to see how Python and PHP raise their game to win!

Best Wishes to them!

Python is a high-level programming language used for general purposes. Guido van Rossum, a Dutch programmer created Python in 1991 with a design philosophy of code readability with significant use of whitespace. It follows an object-oriented approach and allows programmers to write clean code. Often, Python is described as ‘batteries included’ for its standard exclusive libraries. It also supports procedural and functional programming paradigms. The garbage collection system in Python is quite straightforward with automatic memory management.

With a simple syntax and grammar, Python believes in a design philosophy called ‘there should be one—and preferably only one—obvious way to do it’ contrary to Pearls’ philosophy, ‘there is more than one way to do it’.

The core philosophy of Python as mentioned in the Zen of Python (document):

Like Python, PHP or Hypertext Preprocessor is also a generic purpose programming language. However, it was originally designed as a web development language. A Danish-Canadian programmer named Rasmus Lerdorf created PHP in 1994.

You can execute PHP with a Command Line Interface (CLI) which is embedded into HTML. In addition, you can go with a combination of various web template systems. Generally, a PHP interpreter deploys the code as a module on a web server. If we keep aside the web context, we can use PHP for robotic control drone and standalone graphical applications also.

Python vs. PHP is a never-ending battle and we can’t get rid of the fact that Python is cooler than PHP in several fields and vice versa! We are comparing both languages in the light of some pre-defined parameters in the following table:

Let’s see how both PHP and Python differ from each other in terms of their code functionalities:

A PHP vs. Python performance comparison will be an absolute idea to find out the strong competitor. Setting apart the technical parameters, we are using some general parametersto know which scores more in the Python vs. PHP war.

Python is one of the painless languages to learn. It has more code readability rather than other frameworks. In addition, with simpler syntax; Python is the king of big data now.

Unlike Python, PHP is not a general purpose language and it is solely built for web development.

There is no clear winner between Python and PHP regarding document availability. Exclusive documents are available for learning both.

Being a favored framework, PHP has strong community support. The popularity of this web development framework has generated a huge community for the same from where you can get immense support from all.

Python has excellent and well-developed library support and it beats PHP.When we talk about web development, PHP is like a dominating language. However, Python has some extraordinary machine learning libraries such as TensorFlow, Keras, Theano, Scikit Learn, etc. along with web development compatibility. In addition, the libraries of Python are easier to use, faster, and have better integration than other frameworks.

Speed is a critical factor to judge the performance of two frameworks.

Each time a file is created or modified; Python converts the code into bytecode. This code compilation method makes Python quicker than PHP. PHP programmers can simply improve the speed of PHP applications by installing a variety of caching systems. By default, Python is a faster language.

Beginners find Python easy to understand and readable. Python has room for mistakes as the main code does not break due to small faults. This is one of the prominent reasons why the leading CS schools are adopting Python as a core language.

In addition, the PHP community is spending significant efforts to make the framework beginner friendly with all possible tutorials and courses.

Stack Overflow is a popular developer’s platform where various development related questions are answered with the right solutions. Approximately more than 4 million developers use this platform every day. Therefore, it’s essential to compare the Python vs. PHP tags on this prominent platform. 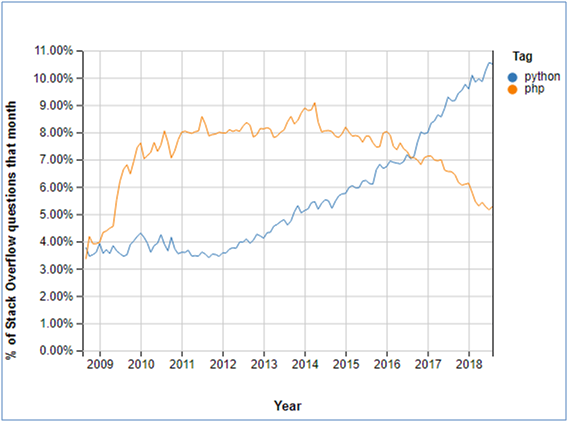 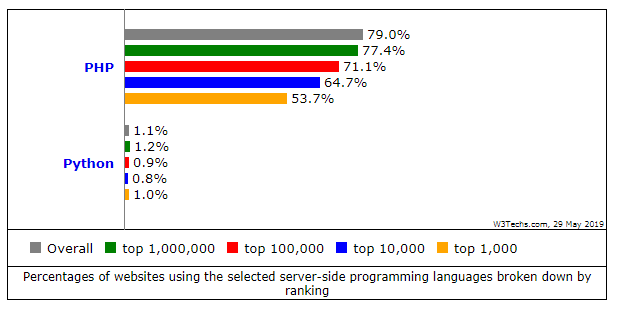 The Market position of Python & PHP

Below is a graph according to a survey completed by w3techs.com on 29th May 2019, on the basis of traffic and popularity. 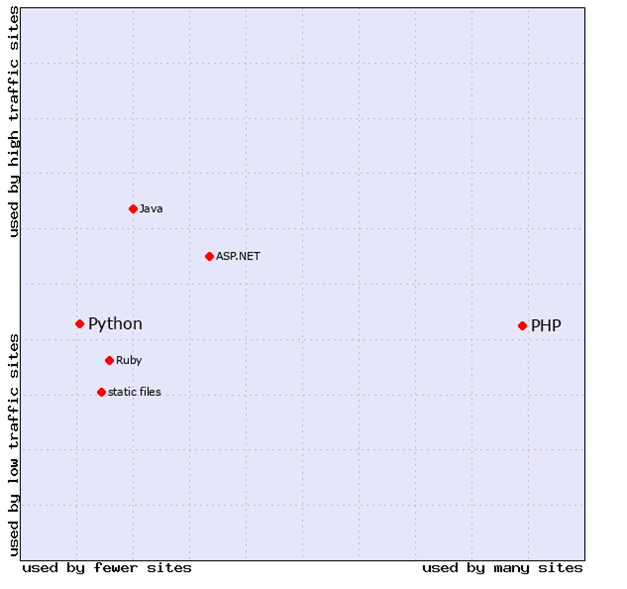 In terms of technical infrastructure Python always score high in the battle, Python vs. PHP, with impeccable code readability. When PHP is widely used for web development, Python is empowered with the magical power to define data science and machine learning apart from the capability of becoming a reliable web development platform. PHP is speedier than Python.