With the introduction of new technologies, older ones must update in order to keep up, and as a result, the popularity and worth of technical languages is changing at a rapid rate. Selecting the perfect language for your next job is really a challenging task.

Python and .Net are two of the most widely used programming languages by developers in 2022. Both are built on OOP (object-oriented programming) principles, are simple to understand and program, provide rapid development, and high performance. Let's talk about which one is better for your business and why. Let's take a look at each one individually to better comprehend the differences.

Why Use Python? Why is it Becoming So Popular?

Python appears to be ideal for data analytics, machine learning, and data analytics. Python is superior in terms of community support and a number of fascinating open-source projects. Python is a bright spot in the computer programming for two motives: it can handle a wide range of tasks and it's actually a very beginner-friendly language. Python incorporates English keywords in its coding syntax, making it simple to grasp and learn.

It is used in machine learning and data science. For data research, the R programming language is most widely used. Python has grown in popularity for data science, especially among workers without advanced expertise in statistics or mathematical sciences, because Python code is regarded easier to maintain and more scalable than R code. 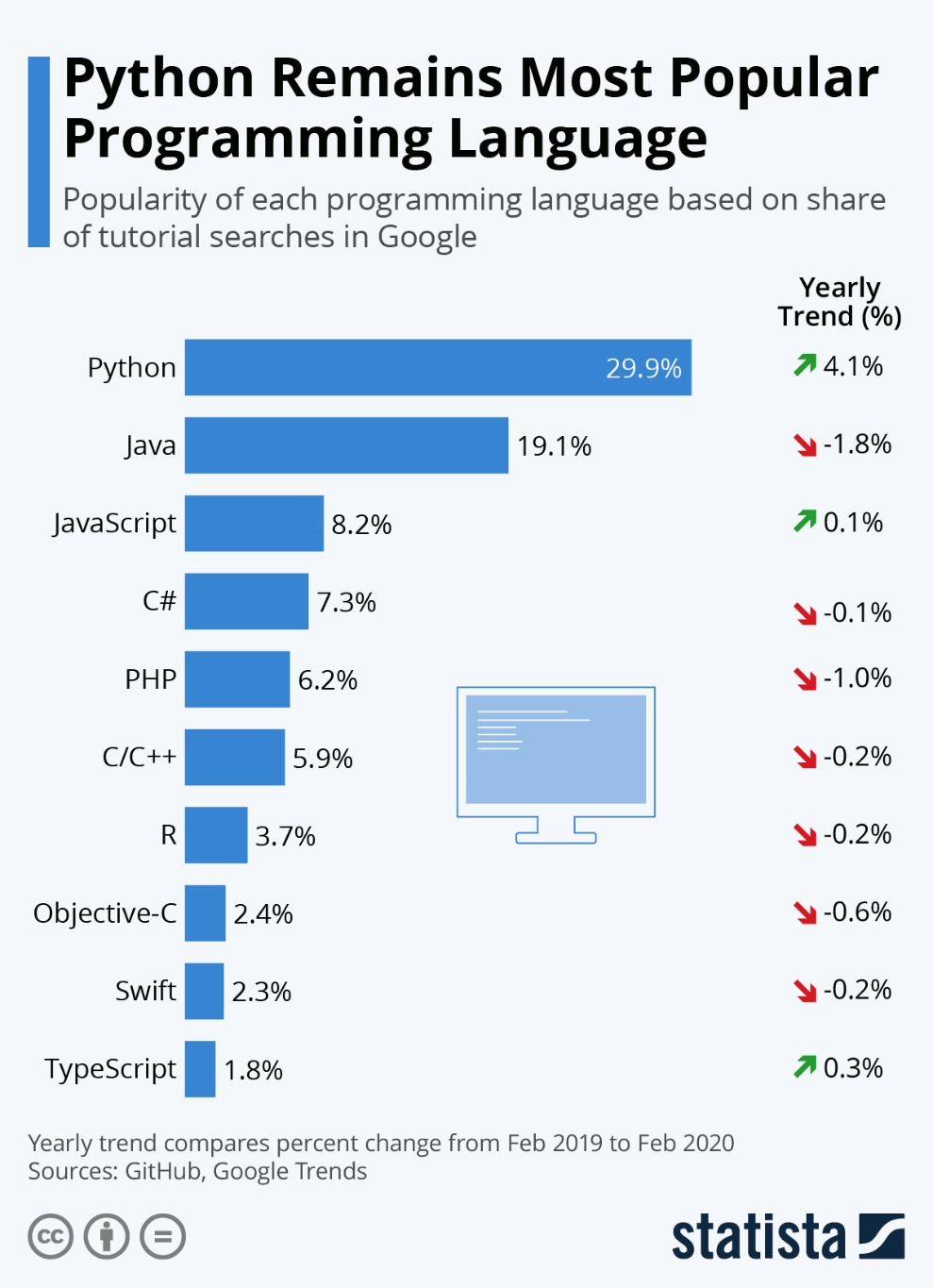 Why Developers Want to Learn Python?

Python has a large number of packages for data analysis and machine learning. It is used to write machine learning algorithms; and uses pyspark, a Python API for interacting with Spark, a platform for working with massive data sets.

Even the most inexperienced web developer can examine massive data patterns without having to understand the ins and outs of more complicated R.

It has a straightforward syntax. Python's grammar is more like English, making it reasonably straightforward to read and grasp. Its simple layout can help you understand code easily.

It has a vibrant community. Python is an open-source programming language that anyone can use. Furthermore, the ecosystem has immense support from a strong community with their own contributions and libraries. You can use Python for data visualization, for web development, or artificial intelligence.

Example of a companies using Python - Google uses Python for a variety of purposes, including AI algorithms and the App Engine Cloud. In the meantime, Python is used to write 99.9% of Dropbox's code, including the server backend, desktop client, website controller logic, API backend, and analytics tools.

What is the Salary of an Entry Level Python Developer in Different Regions?

What is .Net Framework?

.NET is a Microsoft-developed software development framework and ecosystem that enables rapid creation of desktop and web applications. It's a popular free platform that's now being utilized for a variety of applications because it provides the programming environment for the majority of software development phases. Businesses that want a wide range of services like desktop software, web-based services, and cloud infrastructure support, prefer using .NET.

You can create apps that run on Windows, Mac OS X, and Linux due to .NET Core, a suite of tools that includes the runtime, library, and compiler components. The .NET Core are entirely open source which have amazing runtime, best libraries, and compiler that are open for contribution on GitHub.

Why Developers Want to Learn .Net?

Most common programming activities are supported by .NET, including file management, network connectivity, security, and database access. It supports socket programming, HTTP communication, and gRPC, for example, on the networking side. This enables you to design microservices that use a protocol that is more appropriate for your purposes.

You can locate a large number of particular libraries on the public NuGet repository for any other needs that aren't covered by the framework. NuGet is, in reality, the .NET package manager. It enables you to create, share, and utilize a wide range of.NET libraries for nearly any application.

The IT behemoth is actively dogfooding its technologies in order to develop VSTS, their flagship IDE Visual Studio, and a number of internal apps.

A .NET developer is a software engineer who uses Microsoft's .NET technologies to create applications. He is in charge of the design, development, and improvement of software products that meet technical requirements.

The fact that .NET is built on object-oriented programming is one of its best features (OOP). This is the process of breaking down software into smaller portions so that developers can work on it one at a time. They can move on to the next portion whenever the work on one is completed. Once all of the smaller pieces are finished, they may be integrated and managed more efficiently.

Microsoft, Intuit, Intel, Accenture, Cisco, Citrix, Morgan Stanley, and others are among the top firms that use Dot Net for enterprise application development.

Here is a .net case study about how our developers from Clarion helped a client, a leading company in Inventory Optimization solutions, had a very complicated UI for their inventory management Using .Net our developers helped enhance user experience and provided distributed solution with an enhancement of a Graphic Dashboard.

How Much Does an Entry level .Net Developer Earn in Different Regions?

Python modules are so much easier to use. Although the references in documentation get a bit tedious, if you’re an experienced C# programmer, you will enjoy the simplicity of programming in Python. Python's entire concept is based on readability and simplicity. It was intended to be a powerful language, but it has turned into the ultimate beginner language.

However, look into what your project requires, and you may find that Microsoft integration and .Net interdependence are a better fit for you. Examining your business needs are and decide based on them, which will benefit you in long term.

If you want to hire highly talented .Net developers and Python developers, you can contact our experienced team at Clarion.

Most Essential Skills Needed For .NET Developer You Must Be Aware Of