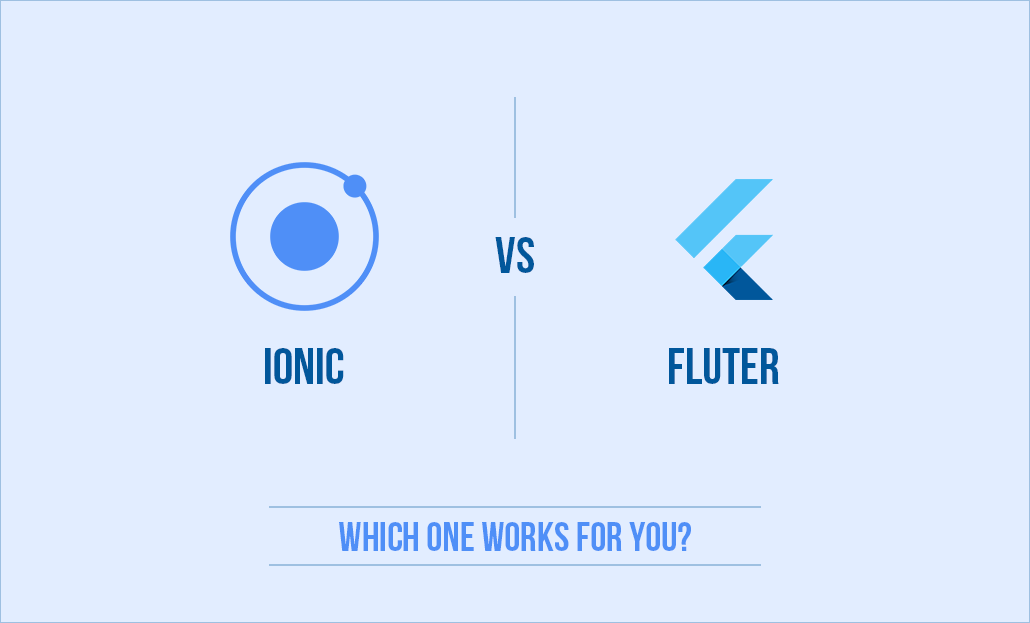 A group of three dedicated coders and thinkers namely Ben Sperry, Max Lynch, and Adam Bradley are behind the scenes creators of Ionic. They released the first Ionic version in 2013. The latest and stable version of Ionic was released on 25th July 2019. The initial Ionic version was built on Angular JS, but now you can select between Angular, React or Vue while working on the latest Ionic version.

Flutter is still an infant in comparison to Ionic. Google released Flutter in 2018. Built with Dart, Flutter is a cross-platform for both Android and iOS. However, the Flutter team is still working to build a strong web support. The desktop APIs of Flutter are still in the early development phase and subject to change even without warnings.

Both Ionic and Flutter share a common mission of building beautiful applications with interactive UIs. The blog discusses common key points of both frameworks with a special emphasize on vs. or opposing & against philosophy. The important takeaway of Ionic vs. Flutter are mentioned below:

Google introduced Flutter as an SDK for building mobile applications. With Flutter, you can create high-performing & native applications for Android and iOS. Dart is used to writing the Flutter apps.

Both Flutter and Ionic share some common goals irrespective of having differences. Some of them are:

In spite of sharing some common philosophies, both Flutter & Ionic are different from each other.

When Ionic ensures a broader boundary like open web standards, Flutter features a limited and self-contained ecosystem. JavaScript which is a widely accepted and popular web development language does not work here. You must know Dart to work in Flutter.

Which one is right for you?

Choosing between both is not easy. Before choosing one of them you must know the technical compatibilities and differences. Ionic vs. Flutter is a fierce war where taking a stronger side a critical decision. Let’s see how they perform based on the following parameters:

Understanding the code portability between Ionic and Flutter helps to define how both code behaves in different environments, processors, and operating systems.

When we discuss Flutter vs. Ionic performance their efficiency level plays an important role in deciding which is suitable for your business.

Flutter vs. ionic performance is always about how you code for both. In short, code quality plays a major role in deciding the performance of any framework.

The Flutter vs. ionic performance relies on the bundle size of your app. Ionic utilizes the standard browser runtime as well as primitives (smallest processing unit). Hence the ionic bundle size is 2,991 bytes. While Flutter needs heavy code even to create a basic app.

Ionic vs. Flutter becomes a fierce standpoint when it comes down to the knowledge and skillset required to build apps in both frameworks. Ionic is a JavaScript framework while Flutter is not. If you want to be a Flutter developer, you must know a language called Dart. The current market comprises 1.9% Dart developers while JS developers are dominating with 70%.

If you know JS, you can work in more than 100 JS frameworks for web, mobile, and native development. Dart features a stand-alone and highly-custom ecosystem that has its constraints. That’s why; it creates confusion on the market skill of a Dart developer. He/she only has to work in Flutter-empowered applications.

The highly-custom ecosystem of Flutter teaches you the only ‘Flutter ways’ of doing things. On the opposite side of the story, if you are creating Ionic apps, you don’t need to learn ‘Ionic ways’ of doing things. You learn to build web apps in general. And mostly, you are learning to code the JS style with CSS. If you know Ionic, you can prevail as long as you are working on web platforms.

When we discuss Ionic vs. Flutter, their approaches to native UI element utilization matter a lot.

Sustainability is a game-changing factor in the battle of Ionic vs. Flutter. Here sustainable means the shelf-life and flexibility of the project.

Ionic-powered projects are more sustainable than Flutter ones. When you build an application on Ionic, you chose a wider platform than Flutter. Anything you create on Ionic, you embrace open web standards. It allows you to follow the same standard and creates a uniform script to develop a cross-platform application. And most importantly, you can use the application with any JavaScript framework.

We are mentioning the basic features of both Flutter and Ionic to understand the Ionic vs. Flutter comparison better:

Who won the battle Ionic vs. Flutter?

It is the time to declare the winner of the battle Ionic vs. Flutter. And our winner is Ionic!

Ionic features an easy learning curve due to open web technologies, while Flutter is limited to Dart.

Pick Ionic and Flutter as per your business needs.