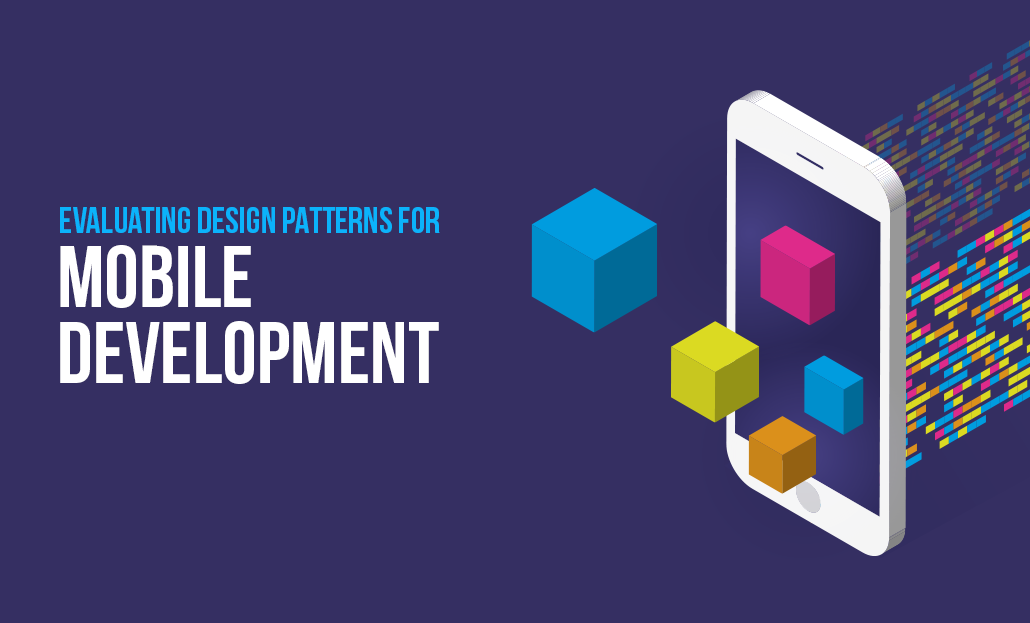 The MVC is the first approach to describe as well as implement software development based on their responsibilities. Trygve Reenskaug presented MVC architecture into Smalltalk-76 in the 1970s. Primarily designed for desktop computing, it has been widely used as the architecture for web apps by major programming languages. MVC includes three components for each object and they are as follows:

The controller comes into picture only when there is a need to render the new View. For example, if you just want to update the View in order to display the data in another format, the controller could do this without requiring an update in the Model. Most of the server-side frameworks include some kind of classic MVC implementation. For example, Angular is a well-known full-fledged MVC framework.

Disadvantages of MVC Design Pattern: All three components are tightly coupled, and this dramatically affects the reusability of each component since each component knows about the other two. Hence, classic MVC is not preferable for modern mobile application development.

Extended MVC is the result of an attempt to adapt the classic MVC in mobile development. In this MVC, there is no direct connection between the View & the Model and the Controller serves as a mediator between them as detailed below:

The controller class implements the interface of an application controller, which performs actions based on the user’s request like saving data, entering data, canceling an action, etc. The sequence diagram explains the transfers in Apple’s MVC architecture:

Since the controller is so involved in the lifecycle of View, it is hard to denote that they are separate. In reality, Apple’s MVC architecture behaves as shown below:

Though you can discharge some of the business logic to the View from the Model, you have less chance to initiate the offloading, since most of the time the View is busy in sending the user actions to the controller. In addition, the controller is responsible for everything and hence the size of the controller gets increased. In addition, when the View is tightly coupled with the controller, it becomes harder for the unit test. You can explore further on how MVC differs from Flux and Redux.

The third iteration to consider for mobile application development is MVP (Model View Presenter), which is developed from MVC and has been widely used in the web application development since 1990. You can implement MVP as either Passive View or Presentation Model or Supervising Controller variants. The following architecture concentrates on the Passive View variant, which is more beneficial than the other two alternatives. 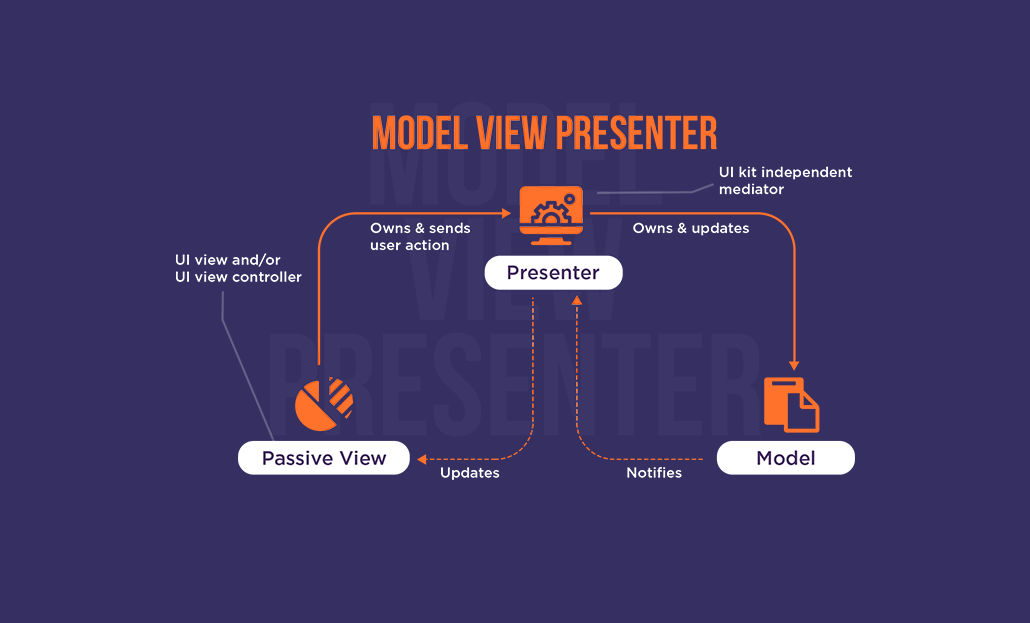 Does this pattern look similar to Apple’s MVC? But it is not. Here the Presenter serves as the mediator between the Passive View and Model. Unlike Apple’s MVC, the Presenter and Passive View are not tightly coupled with each other. The View is made passive and it is not responsible for updating itself based on the changes in the Model. Presenter updates the data and the state of the View.

It addresses the above concerns of the MVC patterns. In addition, the subclasses UIViews and UIViewController are present in Passive View not in the Presenter. Let us look into the sequence of communication in MVP: 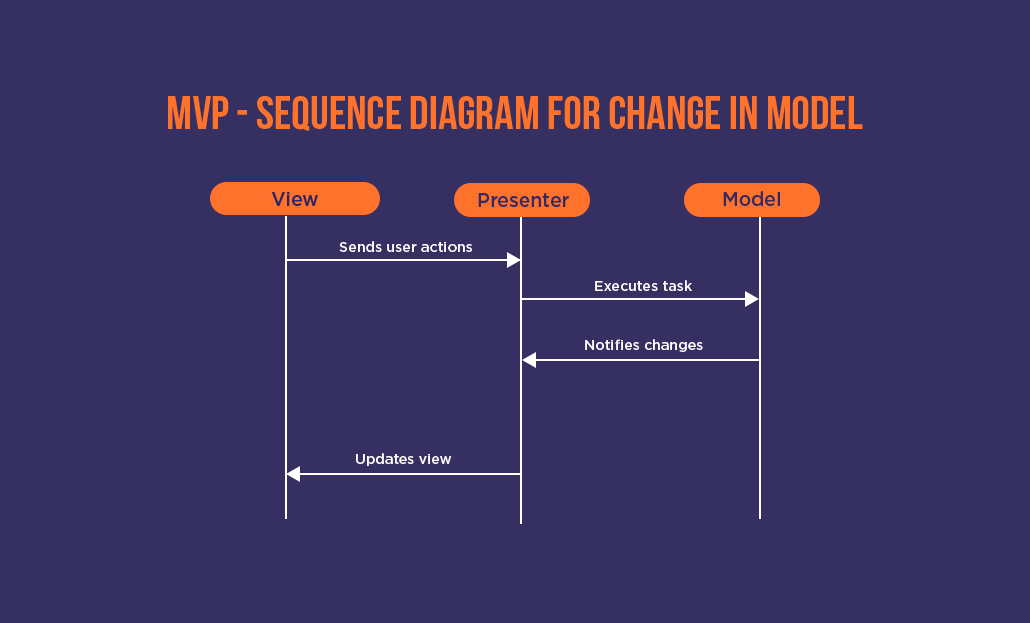 Note – Supervising Controller pattern solves the binding issue by enabling binding between the Model and View, but again it becomes similar to classic MVC architecture and includes all those concerns.

The next iteration to this approach, which resolves the above issue, is MVVP (Model View ViewModel). John Goosman announced this pattern in 2005. It is the most recommended pattern for Android application development. This pattern is derived from the MVC pattern and addresses the issues of previous MV (X) patterns. Let us explore the MVVM architecture pattern: 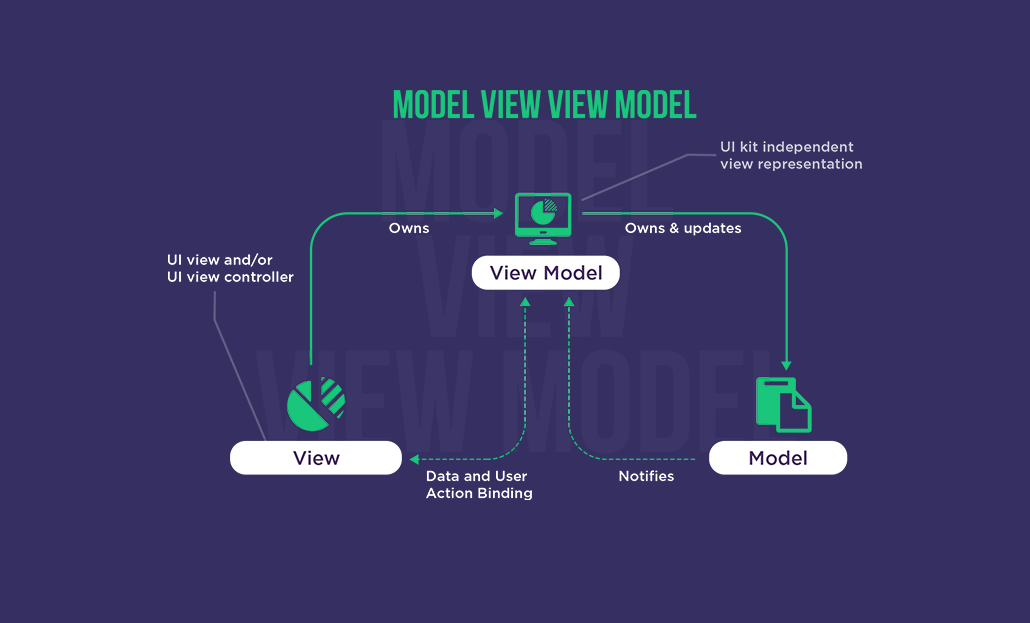 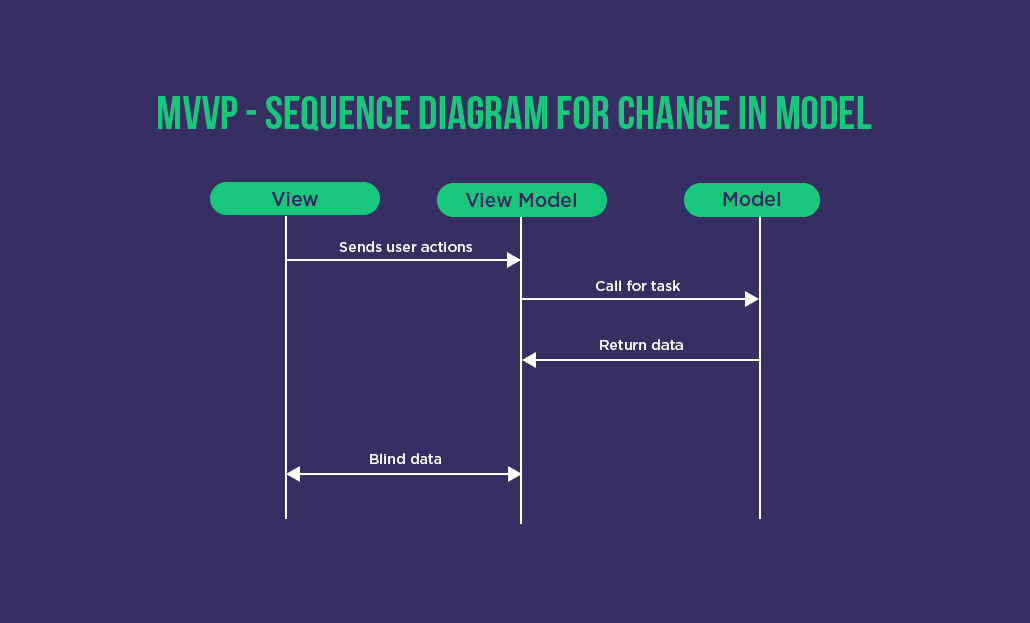 The new Pattern VIPER (View Interactor Presenter Entity Router) entered the development world in 2012. It fuels the idea of separating responsibilities with five layers listed below:

Inter module communication based on the above Viper design pattern:

A well-chosen architecture design pattern can save many issues with mobile application development and maintenance. In general, MVC is an ideal architectural pattern for a small and mid-sized web application. However, for mobile architecture, you need to understand how to keep your View controllers thin by taking out the presentation logic. MVP and MVVM are sufficient for small projects. The Viper is recommended for the cases where the application’s needs are well formed.