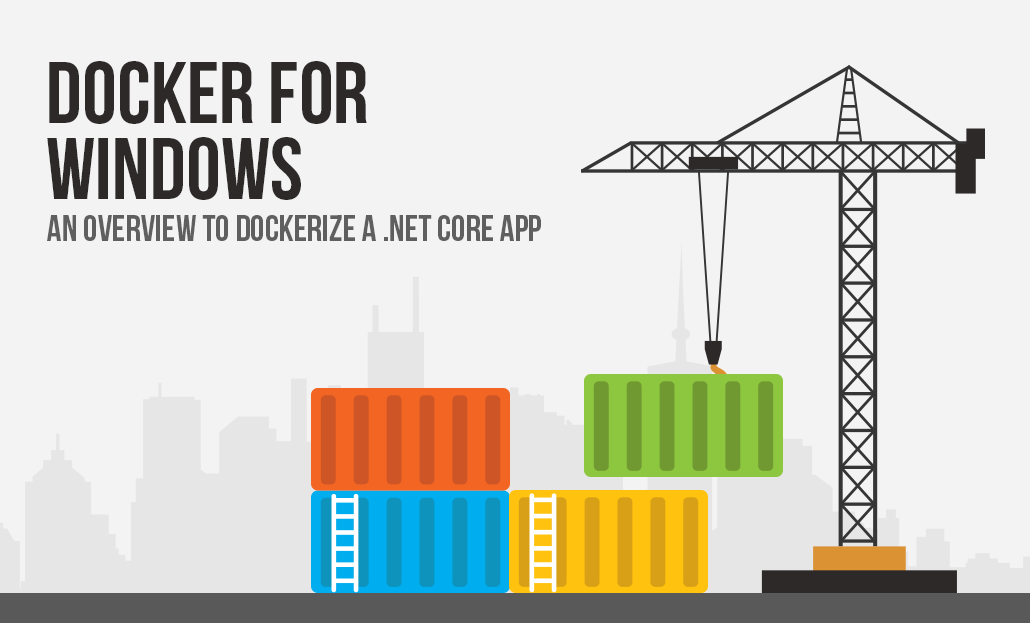 Docker For Windows- An Overview To Dockerize A .Net Core App

With increasing demands, businesses are venturing into large and complex projects, which take more effort and time to build as well as deploy. Whenever the testing team reports an issue, they have to fix the error and then deploy the entire code. To overcome these complexities, most enterprises are moving towards Docker for easy deployment as well as smooth functioning. Docker is a containerization tool developed to make it simpler to create, deploy as well as run applications within containers known as Docker containers.

People working in the Microsoft space believe that Docker containers is a Linux driven technology! However, Docker containers today support even .Net apps. Even though the Docker tool was made for Linux, the Windows and .Net utilities in it are improving every day. Before diving into the details of using Docker for Windows to create, host, and scale .Net applications, let’s shed some light on the basics about Docker containers.

Why do we need Docker, Container and more?

Imagine you have to develop an app, but don’t know who will use it and on which platforms it would run. There are various apps that can run on different OSs. Compiling the code for the most popular operating systems (OS) is one of the ways to solve the issue. However, there is a big maintenance problem in terms of making changes in the app - you have to recompile the code repeatedly for all platforms.

Creating an application within the container comes as a solution. It is an ideal way to wrap an app into an isolated package. The app will not be affected in its container by any processes or apps that exist outside of the container. The container holds everything that the app depends on to function successfully. Wherever, the container moves, the needs of the app will always be satisfied, as it is packaged with everything that is required to run including a library, runtimes, dependences, and so on.

Docker is the standard to build and run containerized applications. It offers a container environment to host any app of your choice. Docker containers are lightweight and allow you to move apps as well as services seamlessly between your host servers. It also enhances performance as well as lowers cost while taking less time to start and offering appropriate resource management.

In addition, you no longer require pre-allocating RAM to each Docker container. The main purpose of using Docker container is to deploy apps to the production environment. Docker comes in two editions: Docker Enterprise Edition (EE) and Docker Community Edition (CE). CE is free to use and an ideal choice for small teams and development environment. EE is a subscription-based edition and suitable for running mission-critical applications. Furthermore, Docker software comes with two separate programs: Docker engine or Docker Daemon and Docker Client.

Docker images are similar to cookie cutters, blueprints or molds. Docker image is defined as the immutable master template used to generate containers that are all accurately identical. The image includes the Dockerfile, code, and libraries that your app needs to run, all tightly packaging together.

A file that comes with instructions for how Docker container should construct your image is referred to as Dockerfile. It is well known as the base image used to create the initial Docker image layer. Alpine, Ubuntu, and Python are some popular official base images. You can stack the additional layers on top of the base Docker image layer, based on the instructions in your Dockerfile.

A Docker image and the command below creates as well as starts a Docker container from an image:

The most common confusion with Docker is – “Is Docker a virtual machine?” The answer is NO.

Virtual machines are the predecessor to Docker containers. The main reason for this confusion is that both isolate an app as well as its dependencies. However, Docker is more superior to its precursor since they are more portable, faster to spin up and demand fewer resources. In addition, both virtual machine and Docker containers differ in their architecture as shown below:

Docker for Mac is software released from Docker, Inc and it simplifies the process of development with Docker on Mac Operating System. The package comprises the full-fledged virtual machine running on a HyperKit hypervisor of Mac OS, Docker client, Docker daemon, Docker machine orchestration, and Docker-compose tools.

Microsoft has been a quick adapter to containerization approaches internally and its commitment towards Docker container is one of the vital cross-industry developments of recent years. Windows includes its own container technology. Like many Windows Server features, Docker for Windows can be installed either using PowerShell or using Windows feature dialog. The entire Docker tool becomes compatible with Windows including Docker compose, data volumes, Docker Client, and all other building blocks required for containerized infrastructure. Since all the components are now locally compatible with Docker for Windows, the Windows applications can execute with minimal computation overhead.

Though it is completely based on the open source Docker service, it includes support for applying the PowerShell command line as well as for further isolation with the compilation of the container-focused Nano server & Hyper-V containers. Nano server is Microsoft’s suggested base image. However, businesses prefer using Windows server core as the base image, though it is larger as well as takes more time to deploy than Nano server takes. This is because Windows server core provides support for a full .Net implementation. As such, it becomes a lot simpler to quickly move the existing application to the server core.

The main advantage of Docker for Windows is that they provide the option to modernize the existing .Net Framework apps, which are running on Windows via containerization. Dockers on Windows gives you the advantage that you’re looking for from containers like consistent environment, increased productivity and reduced computational overhead: 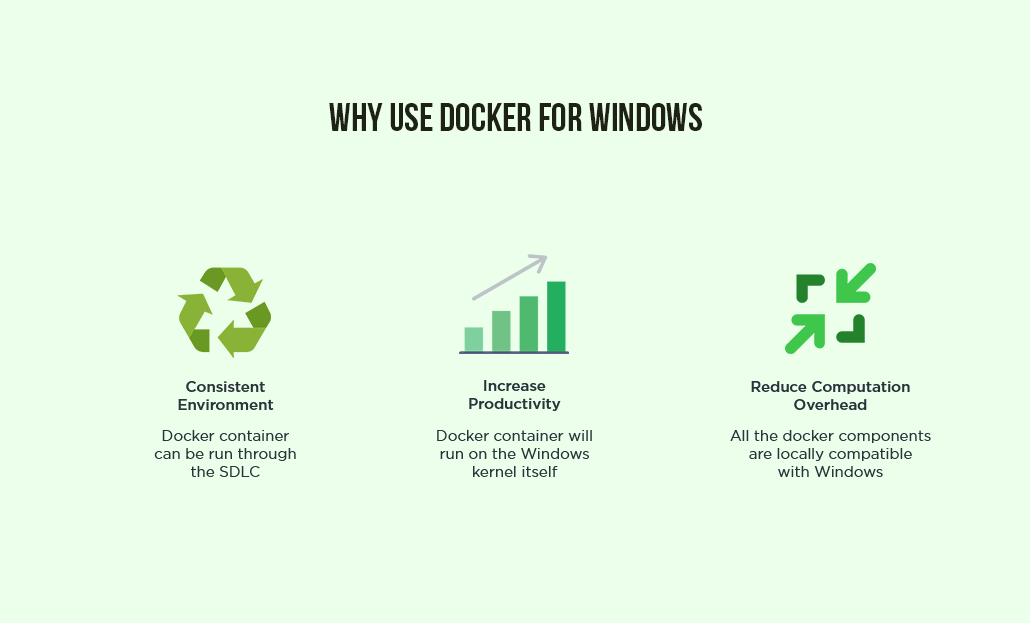 When it comes to building server-side containerized Docker apps with .Net, you can choose from .Net Framework and .Net Core. Both share many .Net platform components but include some fundamental differences in terms of containerizing applications.

You can choose .Net Framework when your app currently running in .Net framework as well as strong dependencies on Windows. .Net Framework is the only option to use in place of technologies that aren’t supported by .Net Core Technology. ASP.Net Web Forms, ASP.Net web page applications, Workflow related services, and WCF service implementation are some technologies supported only in .Net Frameworks, and .Net Core doesn’t have any plan for them. Choosing .Net Framework for Docker allows enhancing deployment experience as it minimizes the deployment problems.

.Net core and Docker are preferable when you want to work with both Windows and Linux containers; since, it meets the cross-platform needs. Similarly, if your application architecture deals with microservices and you want to begin Docker container fast, then .net core can be the ideal choice. .Net Core should be the default choice when you build new containerized .Net apps.

A major benefit of using .Net Core for Docker is it allows running .Net versions of apps side-by-side within the same machine. This is an important requirement for VMs or servers that don’t use containers since containers isolate the .Net versions that the app requires. The lightweight and modular nature of .Net Core brands it as cool for Docker containers.

Overall, Docker containers can run on any machines, and on any infrastructure including cloud. The flexibility, portability, and simplicity that Docker offers aid it to generate such a considerable momentum. Substantial contribution of Microsoft in the Docker community enables running Docker containers on Windows as well as with Windows Nano Server. By doing so, thanks to Docker for Windows, now we can run .Net applications on their native platform.