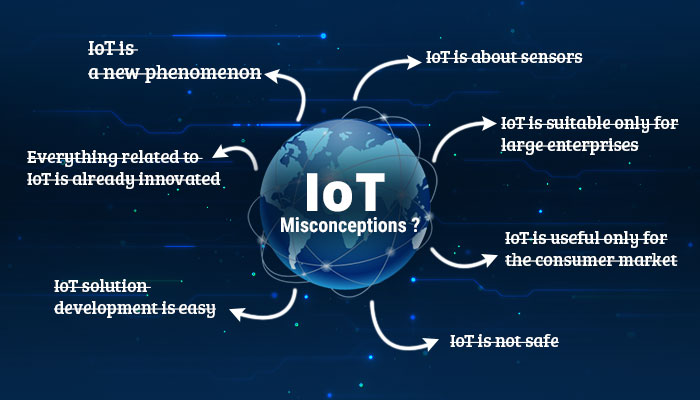 Did you also believe these misconceptions about iot

I am sure all of you have played the Game of Telephone – or Chinese Whispers, as it is called in some parts of the world. It used to be one of my favorite games in the childhood. In this game, a message is given from one person to the next person in line and when the message is finally announced, it is considerably different than the one originally given.

Similar to this game, in the world of technology, one (often isolated) incident is typically attributed to the technology as a whole. This is especially true for newer technologies such as IoT.  Many businesses are not able to reap the full benefits of IoT because of the misconceptions they have about it. This blog tries to clear some of these common misconceptions.

Misconception 1 – IoT is a new phenomenon

Agreed, the word IoT is creating a buzz recently, however, the underlying technology and business models have been there for years now. In fact, the term ‘Internet of Things’ (IoT) was first popularized in 1999 at MIT – that time, it described the architecture of connected RFID devices. Connected devices and the underlying technology has been in use by several businesses worldwide and is already helping them optimize their business operations. The technology is here and it is improving at a rapid pace every single day.

Misconception 2 – IoT is about sensors

Of course, sensors and things are important aspects of IoT – it is called Internet of ‘Things’ for a reason, right? However, there is much more to IoT than that. It involves a lot of things such as APIs, networks, gateways, hubs, cloud, software, and the communication between the physical objects. It is about management and support of the entire IoT solution. From the end consumer’s perspective, it makes sense only when the overall experience is provided – and sensors are just one part of the overall equation.

Misconception 3 – IoT is suitable only for large enterprises

This is probably one of the most common misconceptions about any cutting-edge technology, including the IoT. In fact, with the decreasing prices of cloud services and hardware components, and the increasing availability of more open source tools, the costs of IoT are decreasing day by day. This also means that IoT is certainly not the privilege for large corporates only but even small and mid-size companies can reap the benefits of this technology.

Misconception 4 – IoT is useful only for the consumer market

While you might have heard a lot about the popular applications such as wristbands, smart thermostats or smart fridge as the examples of IoT applications, there are a whole lot of IoT applications which are already existing in the business environments. Be it Rolls-Royce using it to make Intelligent Engines, Virgin Atlantic using it for making the flights safer, Siemen’s Smart Factory in Germany, the farms in Sweden using it for farm management, UPS using it for tracking and tracing vehicles or factories using it for Overall Equipment Effectiveness (OEE) optimization, the applications are numerous.

Misconception 5 – IoT is not safe

When you are talking about connected devices communicating over the Cloud, one cannot deny the possibility of attacks. However, acknowledging this, a lot of work is already being done by the industry leaders in the space of IoT security. New network security protocols and government regulations like HIPAA are forcing the industry to take more measures towards securing private data.  And of course, everything about IoT is not hackable.

With the proliferation of cheap sensors, a variety of open source tools, software, Cloud availability, it does not come as a surprise when I see many companies believing that it is very easy to build and maintain an IoT solution. An IoT solution is much beyond a smart application, a smart product, a mobile app, Cloud hosting, or a dashboard. There are numerous other aspects such as privacy, security, reliability, repeatability, reusability, and scalability which need to be handled quite uniquely in the case of IoT applications. Apart from this, you need a team which has specialized skills such as data science, decision engineering, industrial network engineering, mobile application development, and enterprise connectivity. Of course, hiring, training, and retaining such talent is difficult and time-consuming too.

Misconception 7 – Everything related to IoT is already innovated

If you thought that everything in the IoT space is already invented and already existing, you are wrong. In fact, with IoT, there is a lot of scope for out-of-the-box thinking and creating innovative solutions, and creating business value. It is creating a scope for some really far-reaching thinking that can bring in paradigm shifts in the way businesses are conducted today.

Benefits Of The Cloud In IoT